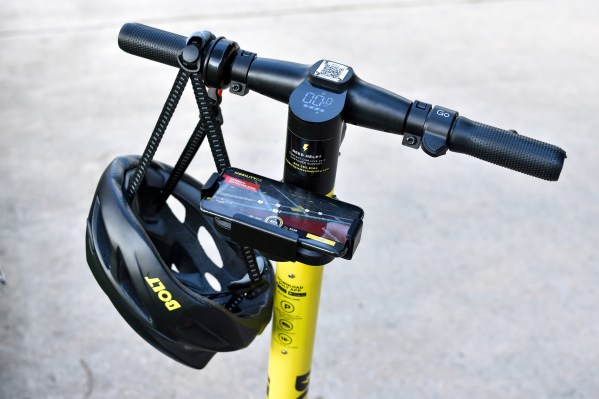 Bolt Mobility, a micromobility company co-founded by Olympic sprinter Usain Bolt, has launched an in-app navigation system for its e-scooters dubbed “Mobility OS.” To make this feature easy to use, Bolt’s next generation of scooters, the “Bolt Two,” allows a rider’s smartphone to be mounted to, and charged by, the scooter.

The simple act of adding a phone mount to a scooter along with this in-app navigation is a differentiator in the shared scooter market. Not many shared e-scooters include phone mounts, a shocking oversight considering that it’s 2021 and most people who ride scooters likely outsource their navigation to Google Maps or Apple Maps. That said, some operators told TechCrunch giving distraction-prone riders a screen to look at when approaching intersections is a safety risk, not to mention the probable costs associated with having to fix or replace mounts that get damaged on the tough city streets.

The mount on the Bolt Twos is also built-in wireless smartphone charger that’s powered by the scooter’s swappable batteries. The impact on the scooter battery of charging a smartphone is “minimal,” according to the company.

Bolt is currently present in 33 cities, towns and campuses across the United States. MobilityOS and the Bolt Twos are already live in Miami, the company’s hometown, but the navigation system will arrive in Bolt’s other markets in the first quarter of next year. The new scooters will arrive into new markets, which Bolt hasn’t yet announced, and into existing markets as older fleets are updated.

In terms of what the competition offers, Voi, which mainly operates in Europe, does have a phone mount, but most of the others, including Veo, Spin, Lime and Bird, don’t. Superpedestrian and Veo say they’re working on getting phone holders on their fleets now, and Lime is piloting them on its Gen4 Scooer in Stockholm before making a decision about rolling them out globally.

Lime, Spin and Bird are integrated with Google Maps, so users can both find e-scooters and route vehicle-specific trips on the app. However, without a mount, most users will probably just end up using headphones to listen out for directions while keeping their phone safely tucked away in a pocket.