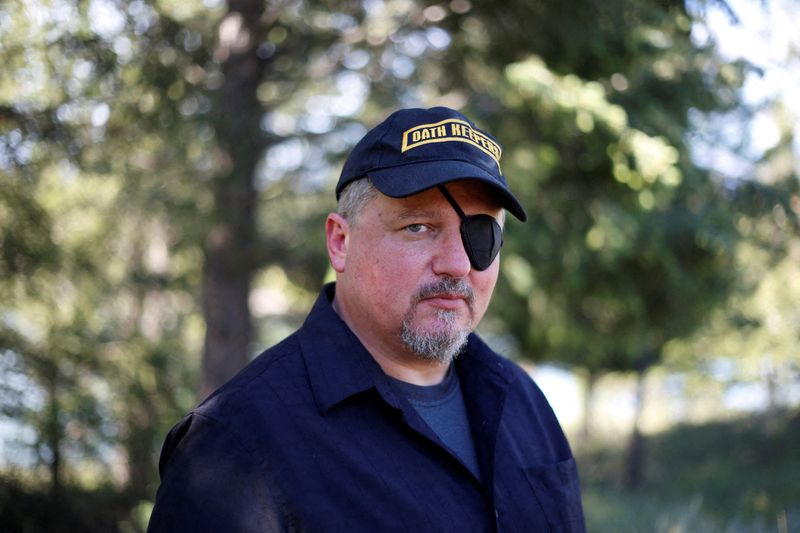 By Bruce Tomaso and Jan Wolfe

PLANO, Texas (Reuters) -The founder and leader of the far-right Oath Keepers group, Stewart Rhodes, on Friday pleaded not guilty to seditious conspiracy charges for his alleged role in the deadly Jan. 6, 2021, attack on the U.S. Capitol.

Rhodes made a brief initial appearance in federal court in Plano, Texas. He was in the custody of U.S. Marshals, wearing handcuffs and leg irons.

Rhodes and 10 other associates or members of the group were accused by the Justice Department on Thursday https://www.reuters.com/world/us/fbi-arrests-far-right-militia-group-oath-keepers-leader-jan-6-probe-nyt-2022-01-13 of plotting to storm the Capitol by force, in a failed bid to block Congress from certifying President Joe Biden’s 2020 election victory.

Rhodes, 56, is the most high-profile defendant of more than 725 charged so far for allegedly taking part in the attack on the Capitol by former President Donald Trump’s supporters. The riot was fueled by Trump’s false claims that his election defeat was the result of fraud.

The Justice Department will request that Rhodes be detained while he awaits trial, a prosecutor said at Friday’s hearing.

“He believes he will be found not guilty,” Bright said, adding that Rhodes will oppose the government’s request for pretrial detention.

“He has no reason to flee. He has no passport. He has nowhere to go,” Bright said.

Rhodes and his associates are the first people charged with seditious conspiracy for their alleged role in the attack. That charge can carry a sentence of up to 20 years in prison.

A judge scheduled a follow-up court hearing for Vallejo on Jan. 20 to determine whether the 63-year-old will be detained while he awaits trial. A lawyer for Vallejo indicated he planned to enter a not guilty plea at a future hearing.

A prosecutor said during Friday’s hearing that the Justice Department will request pretrial detention for Vallejo.

Rhodes founded the Oath Keepers, which believes the federal government is encroaching on its rights. Its membership is largely made up of current and retired military and law enforcement officials.

The indictment portrayed Rhodes as a ringleader who warned his members to prepare for a “bloody and desperate fight https://www.reuters.com/world/us/a-bloody-desperate-fight-us-prosecutors-release-oath-keepers-communications-2022-01-13” to prevent Democrat Joe Biden from becoming president.

It says he helped rally his members to go to Washington and played a key role in organizing and helping stage logistics for the group, including the establishment of so-called “quick reaction force” teams that stashed firearms outside the city limits.